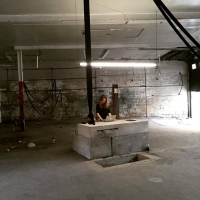 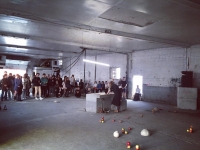 & A Forest (Petrifies) by Felicia Atkinson manifests as two chapters (2 & 3) based on time, delay, improvisation, decay, narration, and live activities.

A novel is in the process of being written by the artist since two years: The novel is called Une forêt se pétrifie. It is written in French on a laptop and later transferred into a manuscript on an analogue typewriter. This novel takes place at several locations, the main being The Petrified Forest in Arizona, where one day, trees turned into minerals. The text mentions a conflict between two groups.

One group of people believes that archives are unnecessary today, and that we should return to oral cultural transmission and learn everything by heart, whereas another group believes in the necessity of archiving anything.

On the journey of this unpublished novel from the archival box and computer file in which it is hiding to the exhibition space, we only have access to its own palimpsests and delays: a few words, a few sounds, a few images, a few objects.

At 8-11 in Toronto, & A FOREST will only last one evening. The sculptures won’t have the time to dry, a performance will blur its apprehension. Time will be the main actor of the plot.

Everything can be destroyed or kept by the hosts; this decision is at their discretion without the need of notifying the artist.

Parts of this project have been produced in association with PME-ART. It was supported by the General Consulate of France in Quebec and Toronto.